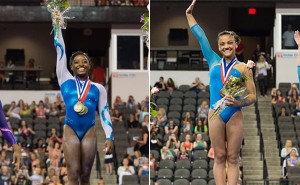 Biles won this year’s title with a 62.400, as well as the vault, balance beam and floor gold medals. Douglas, who was making her return to competition in the USA for the first time since the 2012 U.S. Olympic Trials, posted a 60.500 for the silver. Nichols earned the bronze with a 60.000. Bailie Key of Montgomery, Texas/Texas Dreams, edged out two-time 2012 Olympic gold medalist Aly Raisman of Needham, Mass./Brestyan’s American Gymnastics, for fourth (59.450 to 59.050). This was also Raisman’s competitive return on U.S. soil.

Biles began on the balance beam where she added a front half. She was clean through a back handspring, layout, layout series and dismounted with a full-twisting double back. On floor, she played to the crowd as she soared through a layout full-out, known as the Biles, a double-double and a full in. She performed two vaults. First was a clean Amanar. Her second vault was a Yurchenko half-on, front layout half off. Closing on the uneven bars, she capped of her all-around win with a stuck full out dismount.

On the bars, Douglas wasted no time displaying her trademark big-air, flying high on a piked Tkatchev to a Pak Salto. She ended with a double layout. Beam was clean and solid, as she executed a piked front, standing tucked full and a double pike dismount. In rotation three, she moved to the floor where she controlled her landings well. Her first tumbling pass was an Arabian double front to stag jump. She performed a Yurchenko double twist on vault.

Nichols debuted an Amanar vault in the first rotation. On bars, she connected a Pak salto to a Maloney with a half twist. She dismounted with a double layout. In the final rotation, Nichols mounted with a tucked double-double on the floor exercise.

Madison Kocian of Dallas/WOGA had the top bars score at 15.600.

USA Gymnastics partnered with World Sport Chicago on this event. The two organizations have worked together on the 2009 American Cup, the 2009-10 Chicago Cup, and the U.S. Classic since 2010.