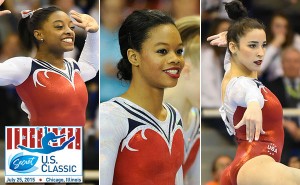 Listed below are the eight gymnasts who collectively have won 21 World and Olympic medals since 2010, including athletes who helped Team USA win the World team titles in 2011 and 2014 and the team gold medal at the Olympic Games in 2012.

The complete senior field is listed below, and the junior field will be released in the near future.

Single-session tickets range in price from $25-$40 for the junior session and $30-$50 for the senior session plus applicable fees. All-day tickets, which include admission to both the junior and senior elite sessions, are also on sale for $125, $79, $69, $59 and $49. The platinum all-session ticket price includes an Olympian meet and greet before competition begins.

To purchase tickets, visit www.SearsCentre.com, call 1-888-SEARS-TIX, or visit the Box Office at the Sears Centre Arena. Group tickets may be purchased by calling GroupTix at 773-327-3778 or by visiting GroupTix.net. Discounted tickets are also available through local gym clubs that are participating in the Club Ticket Sales Program. For more information, go to secretclassic.com.

USA Gymnastics is again partnering with World Sport Chicago on this event. The two organizations have worked together on the 2009 American Cup, the 2009-10 Chicago Cup, and the U.S. Classic since 2010.