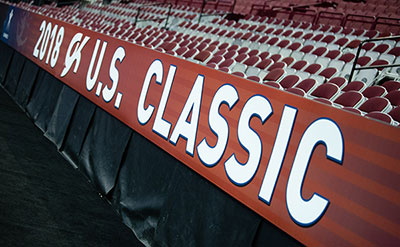 The 2018 GK U.S. Classic marks the last opportunity for many top aspiring gymnasts to qualify for the U.S. Gymnastics Championships in Boston in August, and for those who have already qualified, the GK U.S. Classic serves as a tune-up for the national championships, which is less than a month away.

Carey is planning to compete in the all-around at the elite level for the first time. She says she may have a few upgrades in store on floor because her training for that event has been progressing well.

For the gymnasts who have already qualified for the U.S. Championships next month, this competition provides the opportunity to clean up some routines in competition one last time before heading to Boston.

Though many of the top gymnasts have qualified already, they are still excited to be competing, especially because of the chance to compete alongside Biles.

“It’s awesome,” Hurd said. “I’m competing with all these great gymnasts, and it’s just an honor to be here.”

The junior competition will be headlined by Jordan Bowers, who won the junior all-around at both the 2018 Pacific Rim and Junior Pan American Championships. The 15-year-old from Nebraska is looking forward to performing a couple of different routines on Saturday.

“Just showing off my new upgrades,” Bowers said. “I have upgrades on bars and floor, and I worked on cleaning up a lot after Pan Ams.”

Biles is making her eighth appearance at the U.S. Classic, and she says she is enjoying the role as the veteran in the group.
“I feel like it’s inspiring for me to lead them and to have them look up to some of us older ones,” she said, “and I think it’s exciting for both groups.”

On the concourse, fans will have the opportunity to take photos in GK’s selfie station and browse through GK’s popular leotard styles; check out GK U.S. Classic merchandise and purchase Biles’ book, “Courage to Soar”; and members of the Ohio State University Women’s Gymnastics Team will be handing out posters and signing autographs prior to the Saturday evening session.