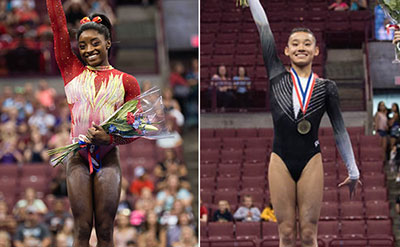 Biles took the senior all-around title with a 58.700 total, which is reportedly the highest all-around posted this year. Riley McCusker of Brielle, N.J./MG Elite, tallied a 57.500 for second, with 2017 World all-around champion Morgan Hurd of Middletown, Del./First State Gymnastics, rounding out the top three at 56.350.

In the junior division, Wong won the all-around with a 55.350 total. Kayla DiCello of Boyds, Md./Hill’s Gymnastics, earned the all-around silver at 54.000, and Jordan Bowers of Lincoln, Neb./Solid Rock Gymnastics, was third at 53.850.

The complete women’s field for the U.S. Gymnastics Championships will be announced in the near future.

Senior Division
Event scores for the top five in the all-around rankings.

Gymnasts who qualified for the U.S. Championships

Junior Division
Event scores for the top five in the all-around rankings.

Junior women who qualified for the U.S. Championships at GK U.S. Classic

GK, a long-time partner of USA Gymnastics, recently became the title sponsor for the GK U.S. Classic and the GK Hopes Championships. The Schottenstein Center, in partnership with the Greater Columbus Sports Commission, is playing host to two events. Columbus has held the 2012 and 2016 post-Olympic tour, as well as the 1992 U.S. Championships.