Simone Biles is Golden in Return 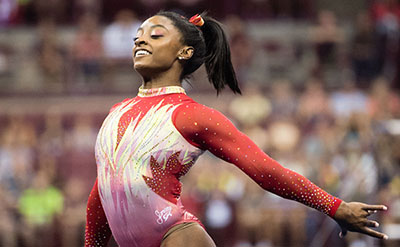 Although Biles ended up winning by a margin greater than one full point, the drama intensified when she made an uncharacteristic mistake on the uneven bars in the third rotation, which nearly cost her the all-around gold medal. In her toe-on full turn, Biles was short — which caused her to drop off the bar—resulting in a 13.350 and allowing Riley McCusker to move up to first place heading into the final rotation.

“I had to reset or I would be all over the place,” Biles said, “So I was like, ‘You know what, Simone? Just forget about bars and go in and do a nice clean, beam routine and see where you’re at,’ because I know if I was too upset and didn’t use that for good, beam would’ve been all over the place.”

Needing a 14.000 on her last apparatus, Biles refocused herself and responded emphatically on the beam, posting a 15.200 and claiming the all-around gold in her first competition in nearly two years.

Ironically, Biles had not fallen once in training on bars this weekend and said beam had given her the most problems leading into the GK U.S. Classic.

“I’ve been struggling the most in practice here on beam, so I don’t know how it ended up being the best,” Biles said. “I wish I could re-do my routine (on bars) because I hadn’t fallen once this whole entire training time, and I really wanted to showcase bars.”

McCusker earned a silver medal in the all-around (57.500) after clean performances on all four apparatuses, which she says will give her confidence heading to Boston for the U.S. Championships.

And even though she didn’t beat Biles, McCusker said she was thrilled to compete against her for the first time and hold her own.

“It’s kind of crazy to think that (I was leading after the third rotation) because (Biles) is amazing, and she’s kind of in a league of her own, and to me second to Simone is first.”

And like many times in the last quadrennium, the night once again belonged to Biles.

The 14-time World and Olympic champion began her night in front of a roaring crowd with a dynamic floor performance that featured high-level tumbling, including a double twisting double layout and her signature pass — the Biles — earning her a 14.750 and a gold medal.

Biles followed up her floor routine by executing a soaring Yurchenko half-on Rudi-off to remain in first place after two rotations.

“There’s still a lot to work on,” Biles said. “Work on the nerves, work on the consistency, work on the landings, but for this point—at this time in the year—I think we’re at a pretty good place.”

Although she claims she needs to work on her nerves, Biles conquered them on the beam Saturday night after her mishap on bars.

“Usually I’m the anchor, so it wasn’t anything new for me to be at the end of the line,” Biles said. “It fuels you to do better because I didn’t want to fall again, especially after having bars happen.”

And in the other three events, Biles certainly looked every bit as good as she did in Rio de Janeiro. And if you ask her, she’s even better now.

“I feel pretty good with where I’m at this time in the year, and even from Rio I feel like I’ve improved, so I’m pretty proud of myself at this point,” Biles said.